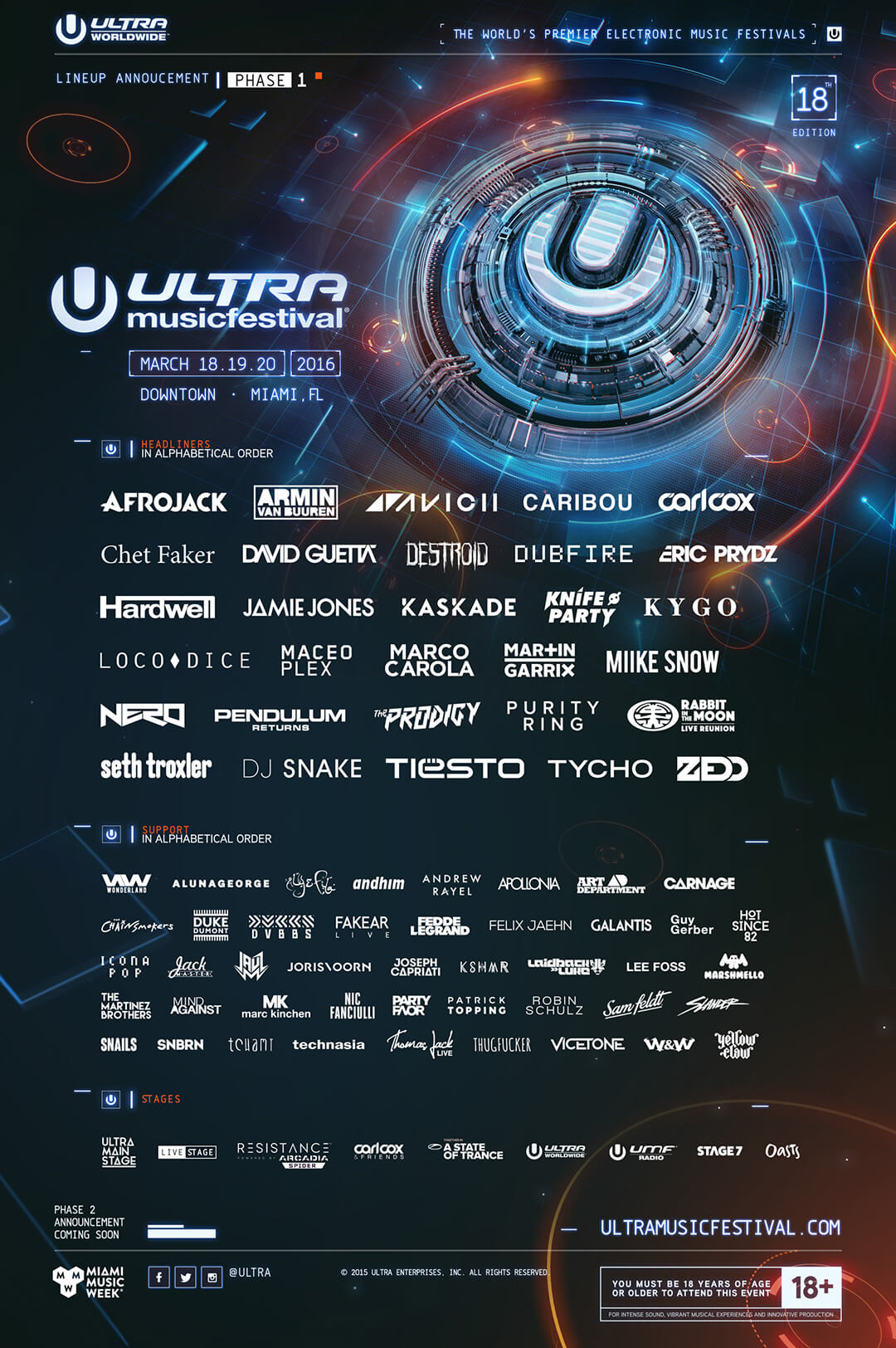 THE PRODIGY, PENDULUM, RABBIT IN THE MOON, CHET FAKER, CARIBOU AND NERO AMONGST LIVE HEADLINERS

With just three months until it touches down at Bayfront Park in Downtown Miami, Ultra Worldwide’s flagship event ULTRA MUSIC FESTIVAL announces the electrifying Phase One lineup for its eighteenth annual edition, taking place on March 18, 19 and 20, 2016. Watch the trailer below:

In another incredible move from the American festival juggernaut, whose unique lineups have always been praised for their diversity, innovation and forward-thinking LIVE programming, Ultra Music Festival 2016 will see the return of three of the most revered LIVE acts in the history of electronic music.

Dubbed “The Godfathers of Rave”, UK pioneers and award-winning outfit The Prodigy will be making their long awaited Ultra Music Festival return, as they prepare to entertain the ULTRA faithful with their industrial brand of rock-tinged electronica. Incorporating rave, electro, jungle, hardcore and everything in between, this fully immersive live show is not to be missed.

Next up, and for the first time since 2011, Australian Drum & Bass getup Pendulum will be heading back to Ultra Music Festival for a very special and rare live appearance. Often credited for the global popularization of the genre, fans can expect to witness a raw, high-octane live experience, rivaled by few others.

And, in a momentous nod to the festival’s very roots, the headline act for ULTRA’s very first edition, which took place on the sands of Miami Beach in 1999, will also be returning for their landmark reunion. None other than Rabbit In The Moon will be showcasing their visionary interpretation of psychedelic trance, house and breaks, as Ultranauts young and old prepare to witness a true slice of history.

Ultra ambassador and crowd favorite Carl Cox returns to the ULTRA Megastructure for a groundbreaking twelfth year to host his legendary Carl Cox & Friends, as does Trance icon Armin Van Buuren, who will take the reins to bring his ‘A State Of Trance’ show to the masses.

Having made its Miami debut at the 2015 edition of Ultra Music Festival to critical acclaim, the RESISTANCE stage will be returning to Downtown Miami this March, bigger and better than ever before. After welcoming ‘The Afterburner’ in 2015, the 2016 RESISTANCE stage will transform into an entirely different beast dubbed ‘THE SPIDER’. Powered by creative pioneers, Arcadia Spectacular, the 50 ton, 20m tall Spider structure is built from recycled military and industrial hardware, rigged with cutting edge technology, features a DJ booth suspended above the crowd, and shoots 50-foot fireballs over the dancefloor. Etched into festival folklore through Europe and beyond, the iconic Spider will be making its debut on US soil at Ultra 2016.

Ultranauts will also witness an extra spectacle each day with the ‘Arcadia Landing Show’. A brand new addition to RESISTANCE this year, The Landing Show will see the Spider come to life, elevating the energy across the area to peak euphoria. Uniting a stunning range of creative elements and all the Spider’s special effects, the show features interactive aerial performances, abductions, mechanical mayhem and breathtaking pyrotechnics as the Spider makes first contact. For further information on RESISTANCE watch the new trailer here and head to resistancemusic.com

Ultra Music Festival takes place during Miami Music Week and is an 18+ event. As Easter falls on the usual dates, next year’s edition will take place on March 18, 19 and 20, 2016. General Admission and VIP tickets are currently on sale priced at $324.95 and $1,249.95 respectively. Early Bird and Payment Plan tickets have now sold out so act fast to avoid disappointment. For further details and ticket information, head to ultramusicfestival.com

Learn more about the artists!